Jon Buckley, a 32-year-old project engineer in our San Diego office, used his vacation and paid his own way to volunteer in Haiti for the firm’s nonprofit, Miyamoto Global Disaster Relief.  Jon worked on the retrofit design of the Lycee Nationale de Petion-Ville, a 4,000-student high school that is a serious seismic collapse hazard in Port-au-Prince. 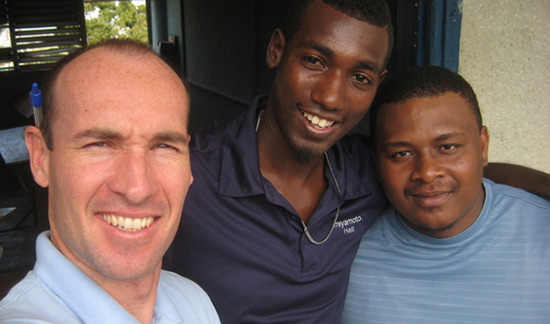 February 17, 2015 – Tuesday Morning
I arrived in Haiti yesterday afternoon. Rene, my driver, and Yves, a fellow Miyamoto engineer who is originally from Haiti, take me on a tour of the downtown where old, damaged concrete and masonry buildings are in abundance. Huge cracks line some of the buildings still left standing from the Haiti earthquake of 2010. This is the first time I have seen post-earthquake damage in person. We pass the collapsed Cathedral of Our Lady of Assumption. Some of the façade is intact, but a majority of the structure was destroyed by the earthquake.

Almost every inch of every downtown street is lined with vendors: a huge continuous market, fruit, cold soft drinks, small plastic baggies of water, some kind of grilled chicken (looks delicious), car parts, small motors, cell phones, cell phone batteries, everything. Yves and Rene say you can come here to find the cheapest prices, much less than in stores.

February 18, 2015 – Wednesday Morning
We spend all day at the school taking measurements and photographs to create as-built drawings so we can model the building accurately for analysis. A whole team of us — Beverly and Yves from Haiti, Sabine from South Africa, Kit from the States/Japan and myself from the States – head to the site together. Once the team has determined the best plan of action for the retrofit, Yves, Beverly and I spend all day there measuring the school.

We have a crazy delicious lunch of traditional Haitian food. It’s a smorgasbord of options and I try a little of everything: rice, beans, chicken, beef, fish, pasta, cheese and a cold glass of fresh squeezed papaya juice — delish!

February 19, 2015 – Thursday morning
Yesterday we were in the Miyamoto office all day, modeling the existing building in ETABS, understanding the school building material components, creating a load takeoff and finding seismic masses. Beverly worked on creating the as-built drawings of the school in CAD, and I worked on modeling one of the buildings.

February 20, 2015 – Friday morning
I wish I knew either French or Haitian Creole. I told myself I would try to learn a word or two a day. A few I picked up:

Yesterday was still more modeling and marking up of drawings. Last night Kit had a BBQ. We had fried plantains, breadfruit, BBQ goat and picklese. Picklese (pikliz) is like a Haitian salsa: pickled cabbage, carrots and peppers. It’s very good, can be hot, goes great with plantains and breadfruit. I think that was my first time having goat. Goat = delicious.

February 21, 2015 – Saturday Morning
Last night we went to Le Perroquet restaurant, which is also a small hotel. They had a band and the music was awesome, reggae style. The really cool part was that Yves came to sing as well. He is a singer in a kampa band, which is the most popular type of music in Haiti.

There were two grocery stores that I went to in Petion-Ville, both of them designed by Miyamoto. When you go in, you see a Miyamoto plaque inside. Miyamoto has a huge reputation here, so many businesses want these plaques on display to show that their building is safe.

Reflection
Traveling to Haiti was refreshing, motivating, heartwarming. What other words can I use to express seeing people from all over the world working together for humanity? I feel honored and privileged to work on a project like this. With the support of others, what we do here can save the lives of many children. Let’s make the world a better, safer place.